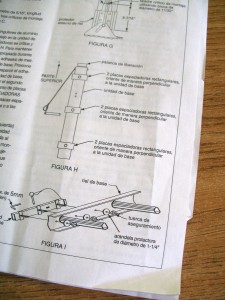 Some people enjoy the challenge of assembling items without instructions. I prefer using charts and explanations. Better still, I like to see what the finished product is supposed to look like. With guidelines, the process is quicker and things turn out better. When it comes to the question of our Christian destiny, we all need as much help as we can get.

When Paul wrote his letters, often it was as if he waved an instruction sheet at the church. For instance, he told the Colossians to move on from the disassembled life of lies and sinful dysfunction and pointed to the picture of the completed human.

Do not lie to one another, since you laid aside the old self with its evil practices, and have put on the new self who is being renewed to a true knowledge according to the image of the One who created him— a renewal in which there is no distinction between Greek and Jew, circumcised and uncircumcised, barbarian, Scythian, slave and freeman, but Christ is all, and in all. (Col. 3:9-11)

The Christian life is not stuck in negatives—do not sin—that is just an early step in the process. We also put on a new identity in Christ. Our life is one of ongoing renewal, as well as sustained victory over sin. No matter what our background identity was, Christians are converging toward a common destiny—His likeness. The significance of previous racial, cultural, religious, and economic distinctions fades as we grow more like the Manufacturer’s model.

The image Paul points to looks in every way like God the Creator. Earlier in his letter to the Colossians, Paul stated clearly about Jesus,

He is the image of the invisible God, the firstborn of all creation. (Col. 1:15)

Paul’s interest was not in facial or other anatomical likenesses; rather he highlighted the character pieces and behavior traits of our heavenly example. So, for instance, we are to forgive just as Jesus did (v. 13).

Does the Christian destiny seem impossible to attain? Do you feel as though you have too many missing pieces and that what you have hardly looks like the picture? Don’t despair, not only do we know what life is building toward, we also have a helper and a promise. The promise is that what God started to assemble in us He will bring to glorious completion.

So, let’s set our eyes on Jesus, confident that God is making us more like Him.