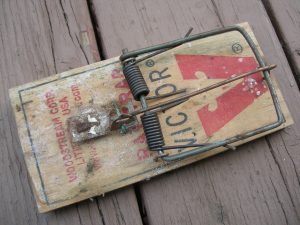 When I want to catch rats under my house I use smelly cheese to catch their attention so that they grab it and spring the trap. The Pharisees wanted to trap Jesus. They dragged live bait, kicking and squealing perhaps, right under his nose.

3 The scribes and the Pharisees brought a woman caught in adultery, and having set her in the center of the court, 4 they said to Him, “Teacher, this woman has been caught in adultery, in the very act. 5 Now in the Law Moses commanded us to stone such women; what then do You say?” 6 They were saying this, testing Him, so that they might have grounds for accusing Him. But Jesus stooped down and with His finger wrote on the ground. 7 But when they persisted in asking Him, He straightened up, and said to them, “He who is without sin among you, let him be the first to throw a stone at her.” 8 Again He stooped down and wrote on the ground. 9 When they heard it, they began to go out one by one, beginning with the older ones, and He was left alone, and the woman, where she was, in the center of the court. 10 Straightening up, Jesus said to her, “Woman, where are they? Did no one condemn you?” 11 She said, “No one, Lord.” And Jesus said, “I do not condemn you, either. Go. From now on sin no more.” (John 8:3-11)

Jesus oozed with mercy and the Pharisees knew it. Their victim had no hope of living unless Jesus intervened. She had been caught red handed violating the seventh commandment; the penalty was clear and justified. In their eyes, Jewish religious law prescribed the solution for sin—death by stoning would wipe the stain from among God’s people. The test: would Jesus respect the religious system and apply it to the woman or would He be unable to resist His insatiable appetite to extend mercy to sinners? If He reached out in mercy the legal bar of the trap would snap down and crush Him along with that odious adulterer.

The Pharisees stood back smirking and watched as their rat sniffed at the trap. He scratched a little in the dust and then looked up. With a few select words he exposed their danger.

The trap so cleverly set for Jesus was bigger than the Pharisees knew. If they relied on the law to do its job they could never escape its reach or its force. The wisest or the most guilt conscious among the Pharisees began to blend with the crowd and shuffle away mumbling. Soon even the youngest, most zealous and idealistic Pharisees were gone. Only the sinner remained. Jesus had done what He so skillfully does. He had turned the trap on its makers. They were so absorbed in their religion that they refused to accept Jesus as God’s solution to sin, bettering the law. When Jesus confronted their guilt, pride propelled them back to their religious holes. Only a wretched woman had the humility to stick around to receive the guilt-free life that Jesus alone could give.

This incident shows there is no contest between law and grace in Jesus’ mind; instead the two work together. Unlike the Pharisees, Jesus knew the true role of the law. In the absence of Jesus the law has the authority to throw stones at sinners; in the presence of Jesus the law bows to His authority. The law exposes our sin, highlights our need for cleansing, and points to our Savior.

We have our own religious systems, don’t you know? Does yours pretend to be the best solution for sin? The test of any religious system is whether it puts Jesus in the center and allows Him to deal with sin and dole out abundant life. Take Jesus where you go. Make room for Jesus to do His work.