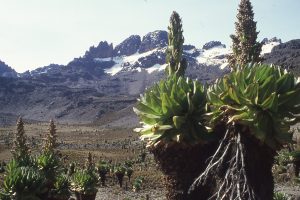 I have a love hate relationship with mountain climbing. While I enjoy the phenomenal views from the top, the grueling climb deters me. I once tackled Mount Kenya with a friend. We started among the shambas1 of Chogoria and spent two days climbing toward the peaks. Around 11,000 feet I began to suffer from altitude sickness and my feet started to drag. A team of super-fit mountain rangers caught up with us and carried my pack to a hut at 13,000 feet where we spent the night. Around three o’clock in the morning the rangers woke everyone in the hut and led a moonlit trek over massive scree slopes. Every step I took required three breaths of thin air. We arrived at a ridge in time to see the sun rise over an African savannah swathed in a patchy sea of clouds. Later we chipped steps up a steep glacier and summited 16,355 foot Point Lenana, the only peak accessible to hikers.

We all live in the shadow of huge mountains. Injustice, addiction, homelessness, poverty, exploitation, corruption, crime, moral decay, and thousands of people groups unreached by the gospel are just a few of the daunting peaks. Changing my own thinking and behavior is difficult enough; changing the world is nigh impossible. Faced with such mountains, all but the most intrepid of us settle for the status quo. We have convinced ourselves that we are too busy and we certainly aren’t capable of ascending mountains like that.

While Jesus was pointing to the unconquered mountain of discipling the nations He used the following illustration:

What king, when he sets out to meet another king in battle, will not first sit down and consider whether he is strong enough with ten thousand men to encounter the one coming against him with twenty thousand? Or else, while the other is still far away, he sends a delegation and asks for terms of peace. So then, none of you can be My disciple who does not give up all his own possessions. (Luke 14:31-33)

At first, Jesus seems to be advising prudence and diplomacy in the face of overwhelming odds. They’re valuable attributes, but Jesus’ point is that there can be no casual followers—discipleship requires total commitment.

Instead of overwhelming ourselves with the magnitude of the global task—reaching the remaining billions and teaching them the kingdom lifestyle—we are to live like confident kings. From the days of Moses, God’s people have understood that when we live under God’s blessings we can win against all odds.2

The goal of discipling the nations will be reached in the same way any mountaineer reaches a summit—step by grueling step, focusing everything we have on the prize. And we are not alone. God placed us in church families to share burdens and cheer each other on.

Let’s not allow the size of the mountains to squash our vision for what God can do through us.

If you would like to receive these short Bible devotions by e-mail, please sign up and then respond to the confirmation message (we will not spam, or share your e-mail address).