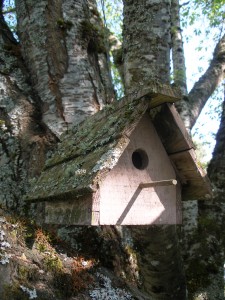 One of the most helpful workshops I ever attended began with a bird house. A consultant for a multinational oil company visited our humble missions base and donated a hundred thousand dollars worth of training over two intensive days.

If you want to build a bird house, begin at the end—draw a picture of what the completed bird house will look like. Then work backwards. Diagram the steps you must take to assemble the house. What parts will you need? What tools? Only when you have a clear vision, a plan, and have done a little shopping are you ready for construction.

If you want to build a discipleship movement, you must be completely focused on the goal. That was Jesus’ point, except that he spoke of building a tower and winning a battle:

For which one of you, when he wants to build a tower, does not first sit down and calculate the cost to see if he has enough to complete it? Otherwise, when he has laid a foundation and is not able to finish, all who observe it begin to ridicule him, saying, ‘This man began to build and was not able to finish.’ Or what king, when he sets out to meet another king in battle, will not first sit down and consider whether he is strong enough with ten thousand men to encounter the one coming against him with twenty thousand? Or else, while the other is still far away, he sends a delegation and asks for terms of peace. So then, none of you can be My disciple who does not give up all his own possessions. (Luke 14:28-33)

Wise building contractors and kings are not known to take on projects until they are fully prepared. Jesus was not suggesting that we should quit because of our unpreparedness but that we must do the planning and preparation.

The tower Jesus mentioned was probably a vineyard watchtower. Tower foundations with no superstructure would be worthless to a watchman; he could never see over the vines to spot any pests or thieves. Imagine the concealed sniggers as the foolish vineyard owner passed by.

So, what is the end product of discipleship? Obviously it is more disciples of Jesus. We are to teach them to live His lifestyle—including making more disciples. Those followers in turn are to make more disciples, until the ends of the earth are reached. The completed picture is something like a frothy vat of brewers yeast—vibrant and expanding. But it is about more than numbers and multiplication; a wholesome community lifestyle develops too when we are responding to Jesus’ leading.

Notice that I have not used the word “church.” Unfortunately, that word comes with centuries of baggage. Although the church described in the New Testament fits the picture, in some cases our church activities and organizational plans seem to distract us from Jesus’ plan. Sometimes we engage in temporary token disciple making activities, rather than being sensitive to opportunities throughout the week. Perhaps we jump from one ministry or project to another like rides in a fair, instead of developing relationships and gifts to the full. Are you part of a church that looks like a discipleship movement?

Let’s begin with the end in mind. Let’s pray and plan to start a discipleship movement, a network of disciples, growing in the Lord and making more disciples. Get equipped with a few simple tools. Stay focused. But let’s do it.

4 thoughts on “The Bird House—Preparing for a Discipleship Movement”